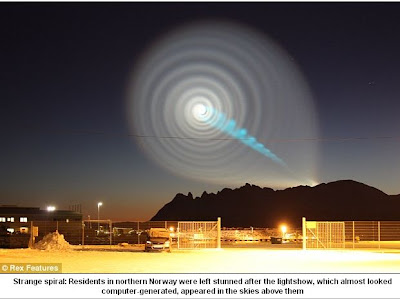 I received a "Blue Moon" alert from astrologer Melissa Stratton this morning.  In her message, she sent this picture, taken on 9 December in Norway.  Here is what she had to say:

I'll bet if you have strong Cancer influence in your chart you are feeling the affects of this already! And the rest of us will too. I put my general eclipse info below and since this eclipse happens on New Year's Eve, I will certainly be writing more specifically about it in my New Year, January issue, so stay tuned for that.

The second reason for this alert has to do with the "Spiral" part.  Just 2 days ago on 12/9 there was an amazing Blue Spiral in the early morning sky over Norway. My Aquarian Wizard friend George first told me (see the email below) and I attached a pic - it is absolutely amazing!  Apparently now the Russians are saying it was a failed submarine missile launch - see:  LINK.  Naturally UFO buffs will scoff at this explanation and say this is just yet another government cover-up, and most likely the debate about it will continue.

The reason I am brining it up here is not to analyze technically what it is or isn't - but to point out the beautiful symbolism of such an appearance now. The synchronicity of this Blue Spiral, images of which are now spreading across human awareness, is simply a beautiful metaphor pointing in the direction of the Blue Moon Eclipse. Personally I am totally fascinated by it - and if it is indeed a failed missile launch, that too plays into higher metaphysical concepts. Wouldn't it be wonderful if each time war-mongers sent out missiles to kill, they all turned into beautiful light shows in the heavens instead! May it ever be so!!!

Peace and Bright Blessings to you all during this season of LIGHT!
~Melissa


If you follow the link in her email, you'll see some more astonishing photographs taken of the event. This kind of thing simply intrigues me.  It shows me how little we know about the mysteries of being alive on our Earth.  And these mysteries make life so interesting and worth living, don't you think?
Posted by Delphyne at 9:06 AM

That is so very cool!!

I thought so, too, Manon!

Happy birthday. I hope you Have many exciting plans for your week end x x x

Thank you, Jasmine and Rebecca!