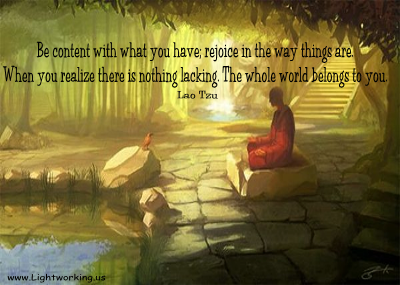 I cannot believe I lost that entire post!  I went in to make a slight correction to give Photobucket the credit for the image and, poof!  Everything disappeared!  Arghhhh!

Let's see if I can remember what I wrote - something about having a few translations of the Tao Te Ching and loving all of them; then remarking on Ron Hogan's translation, which you can find here.

Then I think I posted a few of the stanzas that I liked...and that's it for what I remember.

1
If you can talk about it,
it ain't Tao.
If it has a name,
it's just another thing.
Tao doesn't have a name.
Names are for ordinary things.
Stop wanting stuff. It keeps you from seeing what's real.
When you want stuff, all you see are things.
These two statements have the same meaning.
Figure them out, and you've got it made.
29
Want to take over the world?
Think again.
The world's a holy place.
You can't just fuck around with it.
Those who try to change it destroy it.
Those who try to possess it lose it.
With Tao, you push forward
or maybe you stay behind.
Sometimes you push yourself,
other times you rest.
Sometimes you're strong,
sometimes you're weak.
Sometimes you're up, and sometimes you're down.
A Master lives simply,
avoiding extravagance and excess.
42.
Chapter 42 starts out
with some cosmic mumbo-jumbo
about Tao making one,
one making two,
two making three,
and three making everything else.
I don't know what it means,
and, frankly,
I wouldn't worry about it too much.
Let's get to the practical part:
Men hate to be called
powerless, insignificant, or unworthy,
but that's how
Masters describe themselves.
Because when we lose, we've won.
And when we succeed, we've failed.
Other people will tell you
what I'm telling you now:
"Live by the sword, die by the sword."
That's pretty much what Chapter 42
boils down to.
(See Chapter 46 for more details.)
Posted by Delphyne at 11:26 AM

Hey, thanks for the kind words about my version of the Tao Te Ching! I've updated it a bit, and you can buy it as a book now, too.

Ron! How fabulous to see you here!! I'm definitely buying the book - thanks so much for stopping by. And truly - I love this version of the Tao Te Ching. It is just terrific!

And I posted it on my FB account to nuanced folks who loved it. With many thanks...

love this.
thank you.