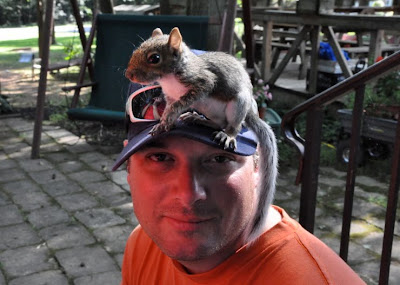 Aren't they both adorable?  Neighbors from the old 'hood - both he and his wife took in baby squirrels and raised them until they were ready to be released into the wild.  This little guy is named Joe - the other one (they actually had the courage to raise 2 of them!!) was named Ross.  Both boys wreaked havoc in the house at times and, at others, charmed everyone.  Including me!

I didn't run this by him to see if it was okay to post it - hopefully, I won't have to pull it.  Perhaps, I should put black tape over both of their eyes??

i love this photo!
i am so glad you posted it. certainly brings to mind all kinds of crazy making scenarios!

tell him great job for me!

Cool! My name is Joe and I say it's okay to have it here.
I'm glad I feed the squirrels in my yard, they are good friends.

Oh how funny! I have always thought that squirrels were so cute. I just wish they weren't so destructive.

The post is adorable! I wrote an article about chipmunks and one of the things I came across in the research is that they are being bred as pets now.

what an adorable photo!!! baby squirrels are so cute. We've had quite a few visiting our patio and yard lately, and in the heat they lounge on the top of our wooden fence, sprawling out on their bellies and just letting their legs dangle down. it's really a hoot to see them lounging out there!
thanks for your good wishes :)
xox Karin

Kathy, Adorable! It amazes me how different the east coast squirrels look from the little guys out here in San Ramon.

I can only imagine the chaos! Probably worse than having toddlers in the house! Glad he sat still for the shot! Thanks for stopping by at mine.