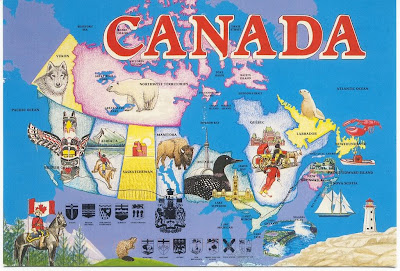 I spent 3 glorious summers in Nova Scotia as a teen in the '60s and just adored it.  It was my first trip out of the country by myself, going to an all girls camp for the entire summer.  I really fell in love with Nova Scotia and the Bay of Fundy, whose tides came in like a speeding locomotive through the cove.  I remember rushing across that cove, mud squishing beneath my feet, in order to get back to shore before the water reached my knees!  I wrote about it here.

I also vacationed one year in British Columbia, loving that, too.  The ferries were a lovely way to get into Vancouver Island and high tea at the Empress Hotel.  I got as far inland as Penticton, where one of the places we stopped was the Okanogan Game Farm.  I will never forget seeing baby musk oxen and the sensation of them sucking on my fingers.  They were so adorable!  One day, I would love to see the interior of this beautiful country.

And who can not love their paper money with animals on it rather than stodgy old men!

Weir's original lyrics from 1908 did not contain any religious references and used the phrase "thou dost in us command" before they were changed by Weir in 1914 to read "in all thy sons command".[1][3][4][5] In 1926, a fourth verse of a religious nature was added.[6]
Toronto City Council in June 1990 voted 12 to 7 in favour of recommending to the Canadian government that the phrase "our home and native land" be changed to "our home and cherished land" and that "in all thy sons command" be partly reverted to "in all of us command." Also proposed, but ultimately rejected, was the alternate wording "thy sons and daughters stand." Councillor Howard Moscoe said that the words native land were not appropriate for the many Canadians who were not native-born and that the word sons implied "that women can't feel true patriotism or love for Canada."[7] Senator Vivienne Poy similarly criticized the English lyrics of the anthem as being sexist,[6] leading her to, in 2002, introduce a bill proposing to change the phrase "in all thy sons command" to "in all of us command." And, in the late 2000s, the anthem's religious references (to God in English and to the Christian cross in French) were criticized by secularists.[8][9]
In the Throne Speech delivered by Governor General Michaëlle Jean on March 3, 2010, a plan to have parliament review the "original gender-neutral wording of the national anthem" was announced.[10] However, there was a mass outcry with three quarters of polled Canadians objecting to the proposal,[11] and two days later the Prime Minister's Office announced that the government had decided to leave the national anthem alone.[12]

Congratulations on this special occasion.

love the title of your blog.