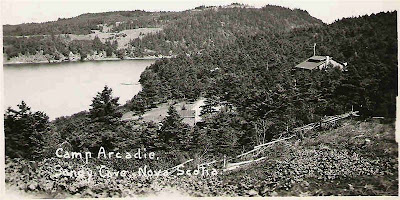 I went to camp here for 3 summers in the mid '60s. It was great. It was my first trip out of the country and away from home for 2 months. The building that you see on the hill was the Main - we all had our meals there and that's where we were able to bathe. We also had singalongs there and campers were given their awards there - I remember getting most improved camper one year. There were several other cabins on the property and my favorite was the one on The Point.

I loved my summers in Nova Scotia. There were times after returning to New Jersey that I would recall scenes from camp as if I were still in Sandy Cove - of walking across the cove when the tide was coming in so quickly that it made my heart race just thinking of it. Those tides of Fundy are truly amazing. Of singing O Canada and The American Anthem first thing each morning before breakfast and raising the flags of each country. Of horseback riding on the beach and cleaning out the stalls. Of the clay tennis court that had to be rolled out - we used wooden tennis racquets then. Of sun bathing on the basketball court. Of steaming clams on the beach and finding sharks' jaws there. Of Helen Anthony playing the piano and singing. And Miss Marge seemed so scary and menacing at times. Miss Anne Claude was from Saskatchewan, which she pronounced at Sass ka CHEE wan. I found that so hilarious and endearing. Miss Liz had no eyelashes and when we were feeling mean, we called her Miss Lizard. Miss Peg was our counselor one year and she was great - she eventually married John Warms, a teacher in our school who was responsible for getting me to Arcadie. He was a counselor at the boys camp that my brother went to, Camp Aldercliff. Unfortunately, John passed away suddenly earlier this year.

I'm not sure why I'm thinking about Canada - most likely because I spoke to Lark yesterday; she lives in Canada now - BC to be exact, the only other Canadian province I've visited. She also spent time in Nova Scotia, but not at this camp. I kept in touch with only one of the campers and actually had the chance to see her again in California, 30+ years after being at Arcadie. It was great. We've lost contact, but I still remember that reunion with much fondness.

And I remember Arcadie to this day. It was one of the best things that ever happened to me. The camp is no longer there; some of the buildings were sold to former campers and counselors as private residences. I'd love to go back and see the property again one day.

Here are a couple of articles that I found on the internet which mention Camp Arcadie:

A Young Girl's Riding Lessons Lead To Some Lessons About People, Too
Sports Illustrated

May 26, 1949 – A new through bus line from Montreal to the Maritimes was expected to give a boost to tourist traffic in Nova Scotia. International Coach Lines planned a route across Maine, re-entering Canada at St. Stephen and terminating at Saint John where passengers could catch the ferry for western Nova Scotia, or transfer to SMT and Acadian Lines buses for Halifax and eastern Nova Scotia.

Liberals in Digby and Clare chose education official T.A.M. Kirk as their federal candidate, while the PCs opted for Yarmouth accountant Donald Filleul.

Margolian’s Digby store, which opened the year before, expanded to include a bargain basement section.

‘My Dear Secretary’ was playing at the Capitol Theatre with stars Laraine Day and Kirk Douglas.
Nova News Now

Hi So who are you? I went to Camp Aldercliff from 1958 to 1966, just so you know there is an Aldercliff Reunion in Digby this weekend!! 7/23/10. Loved reading about Arcadie, it brought back some fond memories. I to am from NJ, but have lived in Maine since 1973. Just wanted to let you know.
Dave T. Berry

Hey, Dave - my brother went to Aldercliff the same years I went to Arcadie. I just sent him your message to see if he knows you. You can send an email to my gmail account - I can give you more details there.

Thanks for stopping by - just was contacted again by a woman I went to camp with after not hearing from her in years. So fun to hear from the past!

Hi Delphyne--- I went to Camp Arcadie too, from 1968-1972, and I got Most Improved Camper in 1970--your memories are so much like mine--walking across those flats across the Cove, coming home from supper picnics at Lake Midway or on the Fundy Shore; the smell of the air and the Queen Anne's Lace as we walked up the path to go horseback riding (without helmets, on/near pavement!); the long Sunday afternoons before the cinnamon toast suppers on the porch of the Main, when we could do whatever we wanted; yes, singing after breakfast, flag-raising, the whole nine yards. I have been coming back to it more often in my heart these days.
I lived in surburban New York then, but live in New Jersey, near PRinceton, now. I went back for a reunion in 2000, to show it to my husband and daughters. They thought it beautiful, but it didnt have the emotioned punch it did for me!
Glad to know you are helping to keep it alive!
Margaret

Just surfing "Camp Arcadie" and came upon your site. You will be happy to know that Arcadie lives on, in private hands. The Main and the Catterbox owned by previous campers and counsellor Miss. Betts respectively, and the one on the point by counsellor Miss. Bonnie. Many campers and counsellors have summer homes in Sandy Cove and we get to look at our beloved Camp daily. For a few years in the late 90's and 00's Miss Betts and Miss Pat organized biannual reunions, which overlapped with the Aldercliff reunion. However they are no longer able to do so, and as you can guess it's awfully hard to find our campers under unknown surnames. Cheers, Carol A'53-A'58