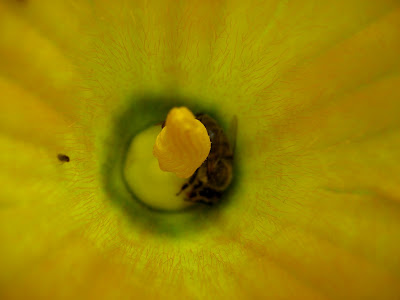 Click on image to enlarge it.
This Bee seems to be sleeping - something I'd like to be doing right now. It's dark and cool at 6 am when I usually start to get up - it's harder with conditions like that!

I seem to have taken lots of pictures with Bees in them. Maybe because they're always around the flowers that I photograph. I'm going to dig up some of the Bee mythology later on and then take a picture of a beautiful Bee pin that my friend, Chenoa, made for me. She just sent it to me a couple of weeks ago, along with 3 other pins that she made.

In the meantime, though, while I mosey on downstairs and brew a pot of Peet's French Roast coffee to wake up, I'll leave the lyrics to Sleepin' Bee. I can't seem to get that song out of my mind!

Catch a bee
And if he don't sting you
You're in a spell that's just begun
It's a guarantee till the end of time
Your true love you have won, have won

Maybe I dreams, but he seems
Sweet golden as a crown