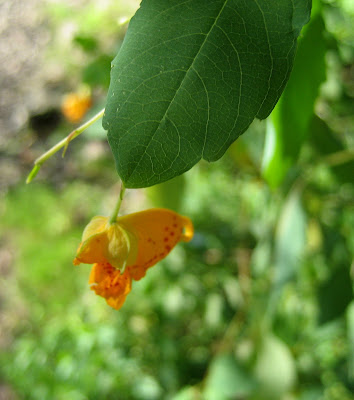 Click on image to enlarge it
I went out yesterday afternoon for a walk with Kylie and took my camera just in case I saw anything interesting. I came back with 76 photos on my camera!

Here are a couple of them - jewelweed. It's part of the impatien family and is also called Touch Me Not. The seed pod apparently explodes when touched - I didn't try it yesterday, but will on our next walk! I found a few references to using jewelweed as a remedy for poison ivy and other related itchy skin ailments.

Jewelweed is commonly found growing near stinging nettle (it does sting) in the park. Native Americans used the watery plant juices to relieve itching and irritation associated with poison ivy, stinging nettle and insect bites. They have also been known to use jewelweed as an aid for dealing with dermatological, gastrointestinal, gynecological, pediatric, orthopedic, pulmonary, kidney, liver and urinary conditions. They also used jewelweed as an eye medicine, a diuretic, a burn dressing, and as a yellow/orange dye.

Orange spotted flowers nodding from thin, threadlike stems easily identify jewelweed. The attractive flowers are said to resemble jewels. The showy flower consists of several petal-like sepals in the shape of a tube or trumpet with a spur at the end.

Jewelweed has two kinds of flowers, the 1-inch flower just described and tiny petalless flowers that never open. These tiny flowers produce most of the seeds, which are in a capsule or pod that explodes or flies apart when touched. The seeds are thrown several feet, giving the plant its other names, "touch-me-not" and "snapweed." When the seeds germinate the next spring, the ground may be covered with tiny seedlings whose pennyshaped leaves don't look much like the bushy, 5-foot-tall mature plants.

Leaves are pale green and have a silvery sheen when wet. The flowers were used to make a yellow dye. American Indians used the juice to reduce irritation from poison ivy, and the juice can be helpful to lessen stinging caused by contact with nettles. Hummingbirds and butterflies are attracted to the showy flowers. June-October. There is another species that has pale yellow and sometimes white flowers. All these species grow along streams and in moist, shady places. 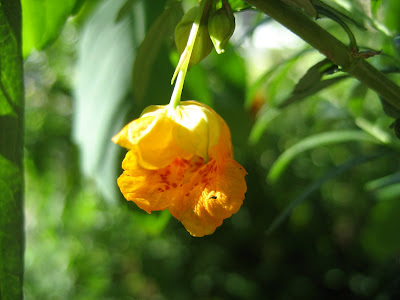 Click on image to enlarge it
Posted by Delphyne at 10:31 AM