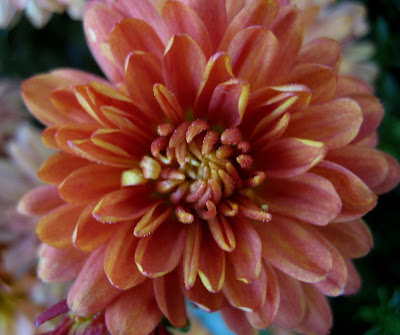 Chrysanthemum potted in front yard - click on image to enlarge it.
I love the Autumn flowers - their colors are so rich and warm. I checked Waverly's site and found this information about chrysanthemums. Fascinating! I didn't know that chrysanthemums had their own holiday, did you?

The chrysanthemum has its own holiday, Chrysanthemum Day, on the ninth day of the ninth month in the lunar calendar (which is sometimes called Chrysanthemum Month). This holiday is celebrated on September 9 in the solar calendar. The double-nine holiday was once a day of paying tribute to one's superiors

According to one legend, Fei Ch'ang-fang of the Han dynasty advised his follower to take his whole family to the hills on the 9th day of the 9th month. He advised him to make red bags for each member of the family and put a spray of dogwood inside which they would wear while they climbed, and they were to drink chrysanthemum wine at the top of the hill. They followed his instructions and when they returned home in the evening, they found all their domestic animals dead. Since then climbing the hills, wearing dogwood and drinking chrysanthemum wine became traditional activities on this day, as a way to avoid evil spirits and misfortune.

Hiking up the hill also implies that one will ascend in one’s career. The word nine is homophonous with the word for “long time,” which is one reason that elders are honored on this holiday.

A special chrysanthemum cake called Chung-Yang cake is eaten on this holiday. Because the Chinese words for cake and high sound the same, so one can eat a cake instead of going for a hike. It is a steamed cake made from flour and sugar, stuffed with chestnuts, pine nuts and other types of nut, and crowned with colorful paper flag. I couldn’t find a recipe for it online, except for a very fancy wedding cake from Martha Stewart, but there are lots of ads for chrysanthemum shaped bundt pans. Speaking of Martha, I love her chrysanthemum cupcakes:
www.marthastewart.com/page.jhtml?type=content&id=channel187245

Chrysanthemum petals are edible. The Chinese make tea out of them which is said to be good for flu. Wikipedia has an article on chrysanthemum tea:
http://en.wikipedia.org/wiki/Chrysanthemum_tea

Chrysanthemum petals can also be added to cream soups and salads. Martin suggests blanching the petals before using them, but not too long or they will become bitter. Here’s a recipe for sweet potatoes with chrysanthemum petals:
http://sidedish.allrecipes.com/az/63823.asp

The leaves of several species, including Coronation Chrysanthemums, are used as a leaf vegetable, often stir-fried with garlic and red chile peppers, according to the Wikipedia article on chrysanthemums:
http://en.wikipedia.org/wiki/Chrysanthemum

The Chinese also make a fish dish that looks like a chrysanthemum by cutting firm white fish into long half-inch wide strips, then dusting them with cornstarch and dipping them into hot oil, holding them by one end so the end in the oil begins to curl and then drop in the rest of the strip. These are arranged on a platter to look like a chrysanthemum and a sauce of vegetables cooked in seasoning and rice wine vinegar is poured over it.
www.low-carb-recipes.ws/Chrysanthemum_Fish_in_Sweet_Vinegar_Sauce.html

Chrysanthemum wine is made on the Double Nine day but must be allowed to ferment for one year before it may be drunk on the following Double Ninth Day. It is said that drinking this fragrant spirit will cure a hundred sicknesses, bring longevity, and ward off evil spirits.
www.taiwaninfo.org/info/festival_c/99_e/html/drink.htm

Jack Keller provides a recipe for chrysanthemum wine on his wonderful wine-making web site. He notes that although the flower petals are edible, some people may have allergies to them (particularly asthma sufferers who sometimes have reactions to flowers in the compositae family) and that the sap sometimes causes dermatitis.
http://winemaking.jackkeller.net/request176.asp

For an easier version, simply drop chrysanthemum petals into the bottom of a glass of your favorite wine.

The chrysanthemum was used in Chinese herbal medicine for detoxifying. It was believed to protect people from getting a chill during the transition time of autumn.

In Korea, the roots are boiled and used as a headache remedy. I eat the leaves of one chrysanthemum family member, feverfew, to ward off migraine headache (it's been very effective).

To the Chinese, the chrysanthemum represents rest and ease. To the Japanese, it is a sign of long life and happiness. In the Victorian language of flowers, it means cheerfulness and optimism. Jeanne Rose assigns meanings by colors with red meaning I love, white meaning truth and other colors meaning slighted love, basing it on an American floral list, Flora’s Dictionary by Elizabeth Washington Gamble Wirt. In China, the white flowers symbolize lament. In some European countries (Belgium, Austria and Italy), the chrysanthemum is the flower of death (as the marigold is in Mexico) and is only used in funerals. In the Japanese floral calendar, the chrysanthemum is the flower of September. In the English floral calendar it is the flower of November.

Interesting that they are edible, as I've heard about them being used as a pesticide... See http://www.northcoastjournal.com/011906/dirt0119.html But nice to know all these other interesting things about them!!!