Chicken of the Woods 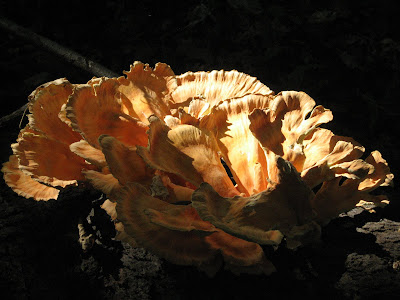 Unlike that Chicken of the Sea commercial, there really is a chicken of the woods! It's a mushroom and when I was out walking the other day, I found a log with a whole bunch of them on it. This is a picture of one of them. Apparently, they are edible and are reported to taste like chicken, hence one of their names.

Wiki has an entry about this fungi here.

Wild man Steve Brill has this to say about the mushroom. He even has a video of him with the mushrooms posted on his website. One of these days, I'll get up the nerve to harvest and pick one - there are numerous recipes online them. Right now, I feel a bit nervous about using them, though!

The chicken mushroom grows on trees, logs, or stumps, deciduous or coniferous, across North America. Most common in autumn, it also appears in spring and summer.

To adapt it to traditional chicken recipes, include a source of protein (i.e., grains or beans) to make the dish filling, plus some olive oil or vegetable oil, because unlike chicken, this mushroom contains no fat.

Unless the mushroom is so young and tender it almost drips with juice, it’s better to cook it in moist heat (i.e. in soups, stews, or in grains) than to cook it in oil.