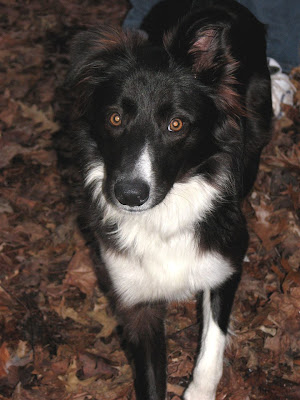 Kylie, 1 week after arriving in NJ from Louisiana
I don't like this disease. I don't think any dog likes it, either. It is sneaky. The seizures arrive unannounced, much like an earthquake. And like earthquakes, there are severe tremors and shaking.

Kylie had one yesterday afternoon. And under the worst case scenario for me. I was working on the computer and she came over, nudging me. I thought she had to go pee, so I got up to take her outside. Now, I keep a baby gate upstairs and downstairs because I've had this fear of her having a seizure while on the stairs. And, I am usually quite vigilant in making sure that the gate is in use.

But, yesterday I forgot.

And unfortunately, Kylie had already headed downstairs. I heard a couple of thuds and then a crash. She had had a seizure and had fallen down the stairs. I saw her thrashing about at the foot of the stairs. I felt sick to my stomach.

I ran down the stairs and straightened her out - she tends to contract during a seizure. I was frantic - I didn't know if she broke any bones or ruptured any organs. The seizure was short, as usual. It took her a couple of minutes to stand up, stagger around and pace off the effects of the seizure. While watching her, I called the vet. I could hear my voice shaking. Then, I called one of my sisters and asked her to drive me to the vet if I needed to go. I knew I wouldn't be able to concentrate on driving and Kylie at the same time.

The vet wasn't in the office, but the receptionist said he would call me and just to watch Kylie until he did. By the time he called, Kylie was back to normal. She wasn't limping and didn't flinch when I felt around her abdomen, ribs and spine. She was alert, interested in playing with her Squeaker and finally, I indulged her in her favorite pastime: I threw in a load of laundry. She seemed back to normal.

Kylie and I went on a long walk this morning. I haven't noticed anything physically amiss with her - let's hope it stays that way.

Dogs never cease to amaze me - they truly live in the moment, another trait they can teach us humans. I read this article this morning and thought you dog lovers might like it, too. 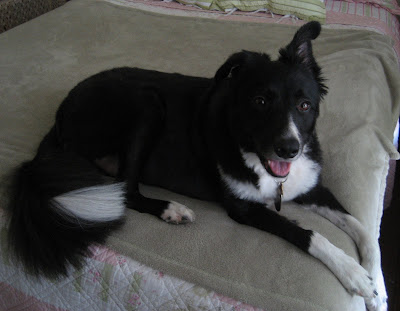 Kylie this afternoon, lounging on the bed while I update this post!
Posted by Delphyne at 9:32 AM

Oh, how difficult for you both. I'm sorry you experienced that and very glad that she is OK. Is there medication for it, would it be something worthwhile or one of those hit or miss things that is better off to avoid?

Give yourselves hugs from me (and Kory, my little dog lover) and know that I am sending you good thoughts!

Thansk, Shelly - she takes phenobarbital twice a day - I think it keeps them at bay, but they're still around. Other than spending thousands - and I mean thousands - on MRIs, scans, etc, I don't know what else to do. So we do this - it's what we can do.

Kathy, So terrible. I am so sorry to hear about this. One of my aunt's pugs has epilepsy and is on meds for it. It is under control. It's been working for many years. Perhaps, this might be a solution for Kylie. Actually now that I'm reading the comment from you, it sounds like she is taking meds. Maybe the dose needs to be increased. Anyway, I hope things get better, and the seizures can be minimized. Best wishes !!

Thanks, Nancy - I just had her blood tested for levels of pheno. They are good. She had been potassium bromide with the pheno, but that caused an episode of pancreatitis, so I had to wean her off that.

I know a few of her triggers, but often the seizures just occur, seemingly out of the blue and mostly during the evening when she's sound asleep. It's all a mystery to everyone involved.

She's a beautiful dog - and she's lucky to have you as her human!

Thank you, MrsB - she's a great joy to me. I just bookmarked your site and will look forward to reading it! Thanks for dropping in - witches are ALWAYS welcome here!