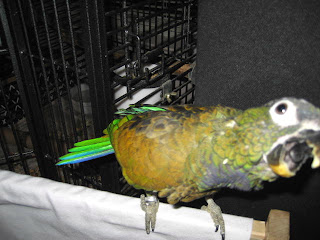 She hates the camera and wanted to kill it - and me, too!

Millie is a 15 year old Maximillian Pionus parrot whom I've had since she was 4. She belonged to a reclusive neighbor who no longer wanted her as he decided to get a dog instead. So, Millie came to stay with me.

Our relationship in the beginning was quite tumultuous. She was quick to bite and in doing so, drew blood on numerous occasions. When she realized that she was staying put with me, she calmed down a bit. She still has her moments, though, when she gets into a real snit for no reason that I know of and will lunge quickly at my arm or hand. She then goes into lockdown for a few hours to calm down - she is normally out of the cage during the day, staying on her perch or on the gate in front of her cage keeping track of what is going on inside and outside of the house. She does consider herself the Queen.

Millie traveled across country with me on the plane when I moved back East. That was an adventure - the security people actually made me open her cage, I guess to check for plastic explosives or some such nonsense and she flapped out of the cage in her fright. Thankfully, I had her wings clipped before we left, so she landed on the floor rather than swooping around the airport. However, that wasn't the end of our airport adventure. My gypsy jewelry set off the alarms leaving Millie to ride down a conveyor belt on her own to wait for me. After the security person determined that I was not an international terrorist with parrot accomplice, we were reunited. She stayed in my lap in her travel cage during the trip, but had to be put under the seat during take off and landing. That seating arrangement for her cost $80. When we all make our way back West, we're doing it in the car!
Posted by Delphyne at 11:05 AM

What an interewsting story of Milly! I had no idea that birds could travel on your lap. This is a great accomplishment! Congrats on her safe arrival back east.

Thanks, Nancy - it's not a trip I would do with her again!