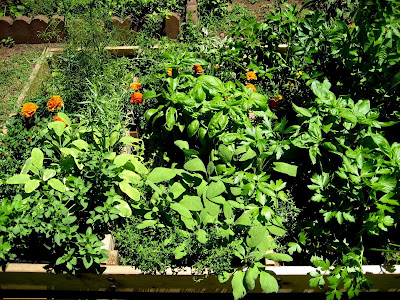 This was my herb garden when I first planted it. Someone in town was tossing out a bookcase which was open on both front and back sides - I thought it would make a great planter and it did! I stapled non-skid kitchen drawer lining to the sides of the bookcase to keep the soil in, filled it with potting soil and planted it with lots of herbs. It was really lush the first 2 years I had it - not so much this year.

The soil in this area needs a ton of amendment - it's got a lot of clay in it. Behind this box is my first herb garden that I dug out with a lot of effort! There were lots of rocks, roots and red clay soil - I wasn't deterred by them, although I was exhausted afterwards! It needs a lot of TLC right now - I'll rake out the debris, mulch it and let it sleep throughout the Winter. Maybe next year, it will perk up again.

I didn't plant any cilantro back then, but I sure discovered my taste for it this year! Here's a great recipe for cilantro pesto - yum!

Remove skins from garlic and shallot - put them with jalapeno into food processor and process. Add cilantro and sherry wine vinegar - process until it becomes a paste. Add in pine nuts - process until nuts are almost invisible. While food processor is running, pour in the olive oil and process until the mixture is a very smooth and wonderful shade of green. Taste for salt and pepper - give it a few pulses until everything is combined.

Spoon into old ice cube trays (ones you'll never use for ice!) and freeze. When frozen, remove from tray and put into a plastic container - keep in freezer until ready to use. I find these cubes a very convenient and handy way to have fresh cilantro pesto whenever I want.

Use with pasta, shrimp and even in guacamole (discovered when I realized I was out of fresh cilantro for the guacamole and tried one of the cubes with the rest of the ingredients - delish!)
Posted by Delphyne at 12:16 PM

Thanks, Nancy - the cilantro pesto is good, but you know how I love garlic and intense flavors!