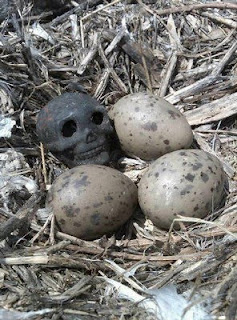 From the folks at Cornell's ornithology department - even the birds are getting into the Hallowe'en spirit! Cornell has a funky nest contest and this nest was one of the winners.

I took this photo of a Herring Gull nest on Swinburne Island in New York City using my blackberry on 30 May, 2009. I conduct the annual colonial waterbird surveys for the New York Harbor and get to see a lot of urban nests with interesting refuse incorporated into them. Balls such as tennis balls or baseballs are a common sight in the nests of ground-nesting birds. We believe these birds roll them into their nests instinctually. This rubber skull was a first for us :)

Kathy, Interestng and Strange! Who knew birds did this?

Funny, isn't it! Having Millie for these 11 years, I can attest to the fact that birds can be a bit unusual. I know she is definitely weird when mating season arrives!