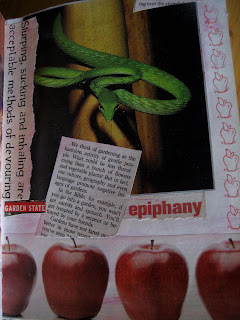 Image from my altered book which was made by Croneletta.
It really feels like Autumn today - it was so cool outside when Kylie and I walked this morning that I actually had to don a real jacket rather than my fleece one. It got me thinking that it's a good day to use the oven and bake something. For dinner or for dessert was the big question. I'm doing both - the menu tonight will be a turkey meatloaf with garlic mashed potatoes plus a nice big green salad. For dessert, I'm baking apples. Elise has a nice and easy recipe which I'll try, omitting the pecans (not a fan).

Of course, the thought of apples brought to mind Croneletta's image above. That and the fact I'm reading Dan Brown's newest book, The Lost Symbol. Dan Brown of The Da Vinci Code, the sacred feminine within humanity's spiritual beliefs, particularly the Catholic Church - and that reminded me of Eve and her apple - and how she was framed!

The Gnostic Media folks have quite a different take on the apple in the garden, one that might be considered even more heretical than The Da Vinci Code. No, not might - I'm sure it already is! It's not an apple that Eve ate and offered to Adam - they don't grow in that area of the world. What Eve presented to Adam was the Amanita Muscaria hallucinogenic mushroom. I have the DVD and have watched it a few times - it is quite fascinating. The website has a free viewing of it. If you are inclined to view the film, there's a part about the history of Santa Claus that I found hilarious, in a good way - something I remembered after reading The Horse Boy. No wonder Santa is so beloved!

I'd love to hear your thoughts about it, if you do watch it.
Posted by Delphyne at 12:57 PM