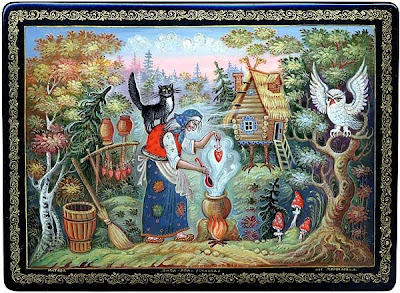 I like Russian lacquer ware painting - their colors, the images, everything. I took these images off the internet some time ago and don't have a source for them - they may be from the old Russian Sunbird site which is no longer in existence. Both of these images are of Baba Yaga, the Slavic Witch.

I really don't like the way Witches like Baba Yaga are portrayed in so many stories - an evil, child eating old woman who lives in the forest. Certainly, there is a fierce side to her, but evil - no. Year ago, I read a wonderful essay about Baba Yaga that Kathleen Jenks posted on her website, Mythinglinks.org. I'm going to post part of the essay here and would encourage anyone interested in Baba Yaga - or the Crone aspect of women - to read the rest of it. You won't be disappointed.

BABA YAGA - THE BLACK GODDESS
By Anonymous
I have been thinking and thinking about the image and story of Baba Yaga now for months and wondering how girls and women can resolve the seemingly paradoxical story of a bony heartless witch with the image of innocence of a rejected and abandoned girl. The following essay outlines how we use myth and story to perpetuate unconscious mindsets and it also unveils the gifts that these stories unfold in our inner psyche.

The story of Baba Yaga is prime among many images of the Black Goddess. The Black Goddess is at the heart of all creative processes and cannot be so easily viewed. Men and women rarely approach her, except in fear. Women are learning of her through the strength and boldness of elder women who are not afraid to unveil her many faces.

Sofia as wisdom lies waiting to be discovered within the Black Goddess who is her mirror image. Knowing that, until we make that important recognition, we are going to have to face the hidden and rejected images of ourselves again and again.

As women, we are confronted throughout our lives with unavoidable body messages regarding the uniqueness of our form and the inevitable changes that characterize aging and the passage of time. Although aging presents difficult challenges for both men and women, women confront some specific difficulties because of their gender. In traditional narratives, the end of biological fertility has relegated women to the status of "old women" who are stereotypically viewed as poor, powerless, and pitiful in our sexist and youth oriented culture. Baba Yaga, often referred to as the Black Goddess, and Vasalisa, often representing Sophia (Matthew's 1992, p. 289-90), are intrinsic to the psyche of girls and women because they shows us that the illusion of form can hide wonderful qualities within.

One of the cruelest of stereotypes that older women face is the "menopausal woman." These are accentuated by the very fact that younger women are often rejecting or distancing to older women in society, unwilling to identify with women older than themselves. These experiences are painful confirmations that the aging woman no longer meets the social criteria of a physically and securely attractive woman. The common result for most women is the activation of shame -- as if becoming/looking older means that something is deeply and truly wrong with oneself.

Conscious femininity is a cyclic process (Woodman 1990) and involves an awakened awareness of the triple form of the Goddess - Mother, Virgin and Crone - and how she exists simultaneously and continuously in all of our psyches, each taking center stage in awareness at different moments. These archetypal patterns are considered intrapsychic modes of consciousness in the individual, and the primordial image of a powerful and integrated woman, crowned with wisdom gleaned through real experience, is again reemerging through both the individual and collective psyches of humanity. First, however, women must learn to embrace, respect and honor their changing bodies, abilities, capacities and WISDOM. We can learn a lot from Baba Yaga!

An archetype is a universal symbol, an inherited mental image to which humankind responds, and which is often acted upon as an unconscious reaction to human experience. These stories are no different and the story of Baba Yaga exemplify this phenomena. The female experience is symbolized by and archetypally corresponds with the ancient Triple Goddess as the creator and destroyer of all life -- "the ancient and venerable female divinity embodying the whole of female experience as Virgin, Mother, Crone" (Mantecon 1993, p. 81). The archetypal figure representing the end of a woman's childbearing years, or the "third age" for women, is the third aspect of the Triple Goddess, the Crone.

At the climacteric or menopause, women are often forced to stand precipitously between the culmination of past experiences, to realize that youth is left behind, and prepare a new space within whereby a fresh image will coalesce as she envisions her future. This is real labor. The traditional constructs that are available to women are largely influenced by patriarchal standards of youth and beauty and we need fresh constructs that honor the diversity of life in all of its forms.

When a culture's language has no word to connote "wise elder woman," what happens to the women who carry the "Grandmother" consciousness for the collective? Prejudicial (prejudged) attacks throughout history against older women symbolized patriarchy's feminization of fear: the ultimate fear of annihilation, to be nonexistent (no existence). Centuries-long indoctrination limits our imagination so that we see this ancient aspect of the feminine only in her negative forms. We see her as the one who brings death to our old way of being, to our lives as we have known them, and to our embodied selves.

Other links to Baba Yaga can be found here and here. Both are worth looking into. And of course, Wiki has an article here. 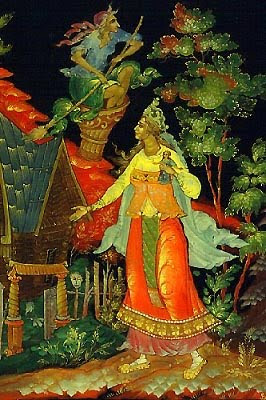 I'm going to come back and read this again later. Lovely images. Interesting article, although I only had time to skim read and would like to take a 2nd look.

Hi, Jasmine - you're right. I do like the artwork and am now following her blog. I also requested FB for her, too.

The article looks very interesting and, like you, I'll be back after lunch to read it in its entirety.

Always good to see you here!

Oh - I saw a Central Asian felt work piece that I just might buy. That's another part of the world that is very attractive to me.

It is so true that women in society are often viewed as "hags" when they age, whereas men are seen as "elders" and worthy of respect. You've now inspired me to read more...thanks!

I've loved Baba Yaga for a decade now, since my fortieth birthday. Thank you for the lovely post bringing this incredible wise woman back to the front of my mind!

For some time now I've been on a quest to show my "older" but fabulous side to people and do my part for destroying that "ugly aging woman" image that mainstream America has adopted.

There are places, even in the US, where the graying women are the most beautiful and energized - like Taos!

Witchy Mom - hag's original meaning is holy. I always try to remember that when I hear someone use that word.

Thanks for stopping by!

Hi, Denise - I love this essay more each time I read it. It is time for us "hags" to push back against the society which would relegate us into a closet.

I'm sure that there are beautiful, greying women in OK, too!