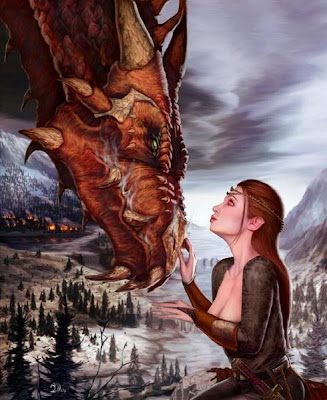 I had the strangest dreams early this morning. One was more of a waking dream and the other was a sleeping dream.

I awoke around 3 am because my upper arms were itchy. I've had this rashy, eczemic thing going on for months and nothing seems to really get rid of it. I've been on a gluten free diet and that seems to have helped more than anything. Some of it is allergies to leaves, pollen and the like - some creams and lotions help; sometimes an Ibuprofen helps; I can't deal with antihistamines and I refuse to take steroids. I was kind of at my wits ends this morning when I woke up, and I suddenly felt this Dragon energy behind me. Sounds strange because I was lying in bed, but that is the sensation I had - the Dragon, a fire breathing one, was behind me. And it was my ally, a friend. I started raging at whatever it was that was causing my skin to itch so and felt the Dragon breathing fire at the source of my condition. I realized I was delivering a curse to the culprit and stated in no uncertain terms that it was banished from here on it and if it returned, the Dragon's flames would be even more intense.

And dreamed. I dreamed I was in Whole Foods, where I worked for a few years after being downsized from my corporate job. The team leader from the department was there and was beseeching me to come back and work in the department. I thought about it and went in to scope out the place. It was extremely weird, nothing like a supermarket at all. Suddenly, the team leader decided to smash all of my Deruta pottery from Italy. It was like he had a breakdown, speaking unintelligibly, smashing my pottery; he was only successful with a few of my items. Inside my dream, I wondered why he was obsessed with with the Deruta pieces.

Until I remember that the pattern that I love and have looks like this: 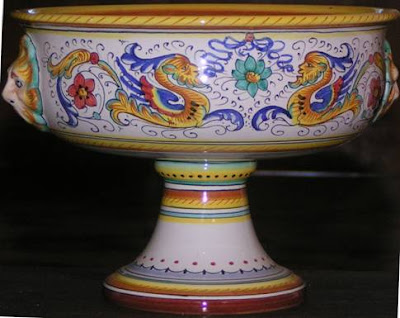 Double Dragons! The image above is not one of my pieces, but the design is the pattern that I have.

I got out of bed and had to consult The Woman's Encyclopedia of Myths and Secrets, by Barbara Walker. I looked up Rhea, not knowing much about her at all. Triple Goddess; Aegean Universal Goddess; southern Russia knew her as Rha, the Red One (the Dragon in my waking dream was both green and red); pre-Roman Latium knew her as Rhea Silvia - Rhea of the Woodland, an early form of the Moon Goddess Diana. I continued reading and found that Hellenic Greece referred to her as Rhea-Hera, both mother and "wife" of Zeus. And then I read, "To spite her twin-brother-son-husband, Rhea-Hera returned to her ancient birth-magic and parthenogenetically conceived and bore the serpent god Python - just as under the archaic title of Eurynome she had created the world alone and given birth to the serpent god Ophion."

Sounded like a Dragon Goddess to me. I'll have to ask my friend, Lark, to check out my chart - last time I had a big snake dream about the Cretan Snake Goddess, there was some activity in that particular part of my chart.

Oh, by the way, my arms weren't itchy when I awoke this morning and they are still calm as I write this.

Update ~ of course, my curiosity got to me before I could email Lark. I still want to check with her and also see what's going on with the Moon's nodes in my chart - they are called the Dragon's tails, I believe.

But, here's what I found out about Draco the Dragon constellation:

In 2002 I realized that Draco the Dragon comes alive with fiery breath from early to mid-October during Libra! Yes, shooting stars known as the Draconids appear to radiate from Draco's head. Wow! Granted this is only a minor meteor shower, but slow, faint, yellow, fiery meteors really do radiate from his head! Peak fire breathing episodes occur October 8-10 from 9:00pm-dawn. Begin looking toward the Big Dipper in the northwest after sunset.

And that blurb led me to Earthsky which says this about the Draconids in 2009:

For the next few nights, Draco the Dragon may or may not be spitting out “shooting stars,” also known as meteors. The legendary Draconid meteor shower is predicted to peak on the night of October 7-8. This shower produced major displays in 1933 and 1946 – with thousands of meteors per hour seen in those years – but since then has been so spotty that the tried-and-true Observer’s Handbook – source of so much wonderful sky info – lists a “?” for the rate of meteors expected at the peak of the Draconids in 2009.

If you are watching from a country location, you might spot some meteors, starting at nightfall and early evening. Most meteor showers are named for the constellation from which the meteors radiate on the sky dome. The Draconids, however, are sometimes also called the Giacobinids, to honor the man who first sighted the comet that spawned this meteor shower. Unlike many major showers, the radiant for the Draconids is highest up at nightfall, so watch for these meteors this evening before moonrise.
Posted by Delphyne at 10:11 AM

Hi! You may already know this, but Tibetans believe that skin are related to the Nagas: http://www.khandro.net/mysterious_naga.htm

Hi, Jill - I did know that, but didn't know about the link you mention. I'll check it out later - thanks!