The Pleiades or The 7 Sisters Constellation 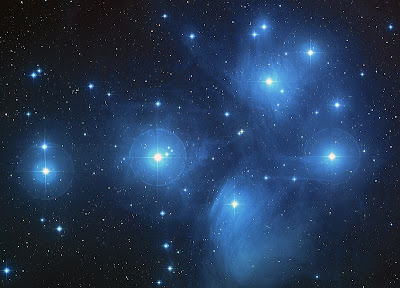 Continuing with the sky theme, here are The Pleiades or 7 Sisters Constellation. Even though I have an interest in this one because I am the eldest of 7 sisters, I know relatively little about it or the importance of it to cultures from ancient times. For example, I did not know that this constellation is at its culmination at midnight on Hallowe'en. Well, in our current age, it is close to midnight, but back in those ancient times, it was midnight. The Witching Hour.

I'm embedding a You Tube from PBS's "Star Gazer" series that he does each year at Hallowe'en regarding these sisters - he calls them the 7 Sinister Sisters! It's an interesting 5 minutes and he's as campy as all get out. I've put the transcript below the video for anyone not wanting to watch it - but it is interesting. I will be broadcast on PBS stations from 26 October to 1 November. (Don't ask me why it says The Sinking of Atlantis! The embed REALLY is the Hallowe'en show!)

Horkheimer: Greetings, greetings fellow star gazers. Because Halloween greeting cards often depict a witch riding a broom in front of a full Moon many people have the mistaken notion that there is a full Moon every year on Halloween when in fact we won't have a full Moon on Halloween again until 2020. So every year I like to point out something that is even spookier than a witch and a full Moon because every Halloween you can see seven sinister sisters flying across the sky at midnight. Let me show you.

O.K., we've got our skies set up for the witching hour of midnight, any Halloween facing south. And if you look up almost overhead you will see the tiny cluster of stars called The Pleiades, but which are more popularly known as the Seven Sisters. And to various cultures long ago, when ever the seven sisters reached their highest point at midnight, which happens every year at the end of October and beginning of November, this was seen as a sort of cosmic signal telling people that this was the time of year to honor their dead ancestors. Now astronomically speaking, whenever any object reaches its highest point in the heavens we say that it has culminated. And whenever The Pleiades culminated at midnight many ancient cultures held great ceremonies in honor of the dead, which is basically where our Halloween comes from.

Now although The Pleiades no longer reach their highest point, that is culminate, exactly at midnight on the same nights as they did in ancient times, nevertheless, they are still almost at their highest every Halloween at midnight as a modern reminder that our ancestors were deeply moved and affected by the cosmos and used many cosmic coincidences to determine important religious and ceremonial events in their lives. In fact some people still believe that the next time the world ends it will also happen on a Pleiades overhead at midnight night. But I wouldn't hold my breath if I were you.

So get thee outside this Halloween or any Halloween at midnight and look almost overhead for the beautiful Seven Sisters, or as i like to call them on Halloween night the Seven Sinister Sisters. And as you look at them remind yourself that these same stars have been seen by hundreds of generations who used them to determine their own special days of the year to honor their dead. And I hope you'll start a tradition of your own and look for these celestial siblings at midnight every Halloween which I think is even more wonderful than a full Halloween Moon. Keep looking up!
Posted by Delphyne at 3:18 PM