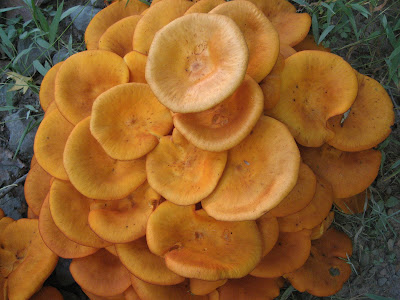 I finally found out the name of these mushrooms that I named Fungi Ravioli. They're called Jack-o-Lantern mushrooms and, far from being edible, they are poisonous. Although an adventuresome consumer of food, I do not eat anything unless I know what it is - particularly the fungi family.

These mushrooms are bioluminescent - they actually glow in the dark. Well, their gills do. This picture of the gills was taken by one of my sisters, Justbelightful. Click on her name and you can see some of her really beautiful photographs. 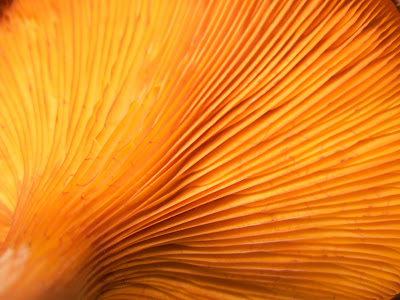 From Tom Volk, a far better explanation of the Jack -o-Lantern mushroom:

Since it's October (meaning Hallowe'en [=Halloween] celebrations at least in this part of the world), I chose the Jack-O-Lantern mushroom, Omphalotus olearius as this month's fungus. Omphalotus olearius, formerly known as either Omphalotus illudens or Clitocybe illudens, often produces its fruiting bodies in abundance this time of year in large clusters on old rotting stumps of hardwood trees. It should be fairly obvious from the picture where this fungus gets its common name-- it's bright orange like the pumpkins used to make Jack-O-Lanterns. However, it is not so obvious from the picture the other reason for the common name. This fungus actually glows in the dark! Not the whole fungus, but just the gills on the underside of the mushroom. If you find these mushrooms, take them into a very dark room and stare at the gills of the fungus until your eyes become acclimated to the dark-- you should see an eerie greenish glow emanating from the mushrooms. It's a fun class project to do-- or fun to do by yourself or with friends or family. The glow is caused by the presence of luciferases, waste products or secondary metabolites from the physiological activities of the mycelium of the. Putting the wastes into the above-ground fruiting structure is the fungus's way of getting rid of its waste products.

Ant the name Jack-o-Lantern? Here's where that comes from:

The Jack-o-lantern custom comes from Irish folklore. As the tale is told, a man named Jack, notorious as a drunkard and trickster, tricked Satan into climbing a tree. Jack then carved an image of a cross in the tree's trunk, trapping the devil up the tree. Jack made a deal with the devil that, if he would never tempt him again, he would promise to let him down the tree. According to folk tale, after Jack died, he was denied entrance to Heaven because of his evil ways, but was also denied access to Hell because he tricked the devil. Instead, the devil gave him a single ember to light his way through the frigid darkness. The ember was placed inside a hollowed-out turnip to keep it glowing longer.

The Irish used turnips as their "Jack's lanterns" originally. But when the immigrants came to America, they found pumpkins were far more plentiful than turnips. So the Jack-O-Lantern in America was a hollowed-out pumpkin, lit with an ember.

My friend from Seattle visited us one Halloween and as very surprised to see us carving turnips. I think they look scarier :)

I agree that turnips are scarier looking - a root vegetable from the depths of the Earth rather than a squash that grows above ground. It's actually a more apt vegetable for this time of year, I think!

Thanks for stopping by my blog and leaving a comment. Love the photo of the fungus!