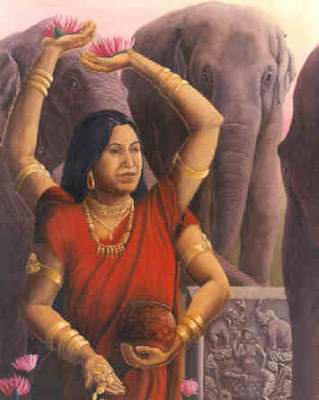 Image taken from here, but the original image is from Sandra Stanton, found here.
Today is Deepawali or Diwali, the festival of lights and harvest festival in India, a time of joy. The celebration lasts 5 days, the third being the one where Lakshmi is honored. The image above is one of the Goddess images from Sandra Stanton - if you are unfamiliar with her work, click on the link beneath the image and see her fabulous work. Here is what she says about Lakshmi:

Hindu Goddess from India who brings fame, prosperity, abundance and good fortune to her worshipers. She is associated with the lotus, which symbolizes fruitfulness, purity and attainment of higher spiritual levels (Padma-Lakshmi). She is often portrayed accompanied by elephants showering her with water (Gaja Lakshmi), referring to the belief that elephants are related to the clouds who are their cousins. It was said that the first elephants had wings and could fly among the clouds. When referred to as Sri-Lakshmi, her numerous capabilities, power, beauty, and glory are emphasized. The image of Padma-Lakshmi carved in the stone tablet is from the north gate of the Great Stupa at Sanchi, India, c. 100 CE. She wears 3 necklaces from Mohenjo-daro, c. 2600 BCE; her earring is from Harappa, c. 2600-1900 BCE; she holds a terracotta stone jar from Chanhudaro, c. 2600-2000 BCE, Pakistan.

More about the festival and Lakshmi comes from Wiki:

Diwali marks the end of the harvest season in most of India and Nepal. Farmers are thankful for the plentiful bounty of the year gone by, and pray for a good harvest for the year to come. Traditionally this marked the closing of accounts for businesses dependent on the agrarian cycle, and the last major celebration before winter. The deity of Lakshmi symbolizes wealth and prosperity, and her blessings are invoked for a good year ahead. There are two legends that associate the worship of Lakshmi on this day. According to the first legend, on this day, Lakshmi emerged from Kshira Sagar, the Ocean of Milk, during the great churning of the oceans, Samudra manthan. The second legend (more popular in western India) relates to the Vamana avatar of Vishnu, the incarnation he took to kill the demon king Bali. Thereafter it was on this day, that Vishnu came back to his abode, the Vaikuntha; so those who worship Lakshmi on this day, get the benefit of her benevolent mood, and are blessed with mental, physical and material well-being.

As per spiritual references, on this day "Lakshmi-panchayatan" enters the Universe. Vishnu, Indra, Kubera, Gajendra and Lakshmi are elements of this "panchayatan" (a group of five). The tasks of these elements are:

* Vishnu: Happiness (happiness and satisfaction)
* Indra: Opulence (satisfaction due to wealth)
* Kubera: Wealth (Generosity; one who gives away wealth)
* Gajendra: Carries the wealth
* Lakshmi: Divine Energy (Shakti) which provides energy to all the above activities

The third day of the festival of Diwali is the most important day of Lakshmi-puja and is entirely devoted to the propitiation of Goddess Lakshmi. On this very day sun enters his second course and passes Libra which is represented by the balance or scale. Hence, this design of Libra is believed to have suggested the balancing of account books and their closing. Despite the fact that this day falls on an amavasya day it is regarded as the most auspicious.

The day of Lakshmi-Puja falls on the dark night of Amavasya. The strains of joyous sounds of bells and drums float from the temples as man is invoking Goddess Laxmi in a wondrous holy "pouring-in" of his heart. All of a sudden that impenetrable darkness is pierced by innumerable rays of light for just a moment and the next moment a blaze of light descends down to earth from heaven as golden-footed Deep-Lakshmi alights on earth in all her celestial glory amidst chantings of Vedic hymns.

A sublime light of knowledge dawns upon humanity and this self enlightenment is expressed through the twinkling lamps that illuminate the palaces of thewealthy as well as the lowly abodes of the poor. It is believed that on this day Lakshmi walks through the green fields and loiters through the bye-lanes and showers her blessings on man for plenty and prosperity. After Lakshmi Puja, lamps are lit all over the house.

Lakshmi Pooja, or the worship of the goddess of wealth, is the main event on Diwali in North and West India. It is extremely important to keep the house spotlessly clean and pure on Diwali. Goddess Lakshmi likes cleanliness, and she will visit the cleanest house first. This is also the reason why the broom is worshiped on this day with offerings of haldi and kumkum (turmeric and vermilion). Lamps are lit in the evening to welcome the goddess. They are believed to light up Her path.

Lakshmi Puja consists of a combined puja of five deities: Ganesha is worshiped at the beginning of every auspicious act as Vighneshvara; Goddess Lakshmi is worshiped in her three forms - Mahalakshmi (the goddess of wealth and money), Mahasaraswati (the goddess of books and learning), and Mahakali; Kuber (the treasurer of the gods) is also worshiped.

Prof. P.C. Jain and Dr Daljeet wrote a great article over at Exotic India. Here are a few snippets from it.

Deepawali is the festival of light celebrated since times unknown in every part of the land from a grass-thatched mud hut to a palace and from a commercial or industrial establishment to a shrine. Not merely Hindus or the followers of other indigenous sects - Jains, Sikhs, Buddhists ., even Christians and Mohammedans are enthusiastic about it, and it is not only the door of a Christian's house or that of a Mohammedan but even that of a chapel or a Dargah - a saint's holy burial, is often found lit with a lamp dispelling the darkness of the darkest night, the Amavasya in the month of Kartika - the eighth month of the Indian calendar.

Deepawali celebrations are fixed for the Amavasya night of the month of Kartika but this Amavasya is not a mathematically counted day. It is rather the outcome of the planetary position. The Zodiac is divided into twelve parts having twelve Zodiac signs, namely, Aries, Taurus, Gemini, Cancer, Leo, Virgo, Libra, Scorpio, Sagittarius, Capricorn, Aquarius, and Pisces. The cycle of the sun's movement across them is the basis for determining both Deepawali as well as Holi, the other as much popular festival of India. Deepawali occurs on the day when the sun transits from Virgo, the sixth sign, into Libra, the seventh - a planetary position on the Kartika Amavasya. From this Amavasya the later half of the planetary year begins. The planetary position on this day determines the prospects across the year not only of those born under this or that zodiac sign but also of the society in general, the nation and the world. Being linked with the arrival of crop which equips all with buying capacity Deepawali has special meaning for traders, and accordingly they maintain their account books from Deepawali to Deepawali, often maintaining this periodicity as their calendar.

Beth has a great post up about Diwali, too - go on over and read it!

And, of course, no celebration is complete with special food. This site gives lots of recipes for the foods cooked for Deepawali.

May Lakshmi bestow her gifts upon all of you this season.
Posted by Delphyne at 9:26 AM

Its also festival of fireworks here in Birmingham. We have a large Indian community here :)

We have a large Indian community not too far from where I live, too. I did not know that they used fireworks in this celebration - makes sense as they are lights in the sky!

It was certainly interesting for me to read this post. Thanx for it. I like such themes and everything that is connected to this matter. I definitely want to read a bit more soon.
Alex
Cell phone blocker

Thanks for stopping by, Alex - lots to learn about all of the celebrations that humans, worldwide, have.