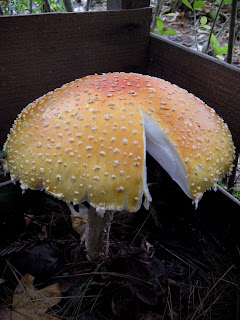 This is the very same mushroom I posted yesterday - I wonder if the Mushroom Faery returned to harvest it for a special mushroom pie? It appears she used her magic knife to take a perfect slice - and I missed seeing her cut it!

I've been interested in mushrooms for years - first, for their culinary uses. They are delicious - I especially love the Shiitake mushrooms. Then, I found out about their medicinal value when I worked at Whole Foods. The New Chapter rep, Brian, came into the store and noticed that I was sneezing and clearly suffering from seasonal allergies. He offered me a bottle of New Chapter's "Breathe." I asked him what it was and he told me that it was a formula of mushrooms that helped allergies. I rolled my eyes, but took the bottle because I was already a fan of New Chapter vitamins, having taken them for a few years.

I took 2 of the capsules and went about my business. About an hour later, I realized that my sneezing had stopped, that my breathing was much clearer and that I had more energy. I was impressed. The formula included both Cordyceps and Reishi mushrooms, both noted for providing stamina to mountaineers, Olympians and Himalayan guides. I've taken them since whenever allergies strike. (I was kind of upset today when I went into the New Chapter site and noticed that the mycomedicinals were no longer listed! I'm waiting to hear from them about why - I sure hope that they haven't discontinued making them.)

Paul Stamets is the man who provides the mushrooms to New Chapter. He is an amazing mycologist and fascinating to listen to when he speaks. I'm embedding a You Tube of him explaining how mushrooms could help save our beautiful Earth. It runs about 18 minutes and is so interesting. I hope you enjoy it.